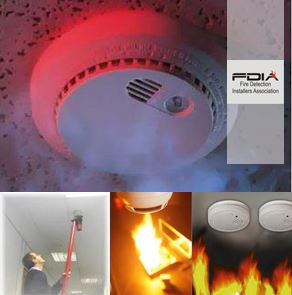 A smoke detector is a device that detects smoke, typically as an indicator of fire. Commercial, industrial, and mass residential devices issue a signal to a fire alarm system, while household detectors, known as smoke alarms, generally issue a local audible and/or visual alarm from the detector itself.

Smoke detectors are typically housed in a disk-shaped plastic enclosure about 150 millimetres (6 in) in diameter and 25 millimetres (1 in) thick, but the shape can vary by manufacturer or product line. Most smoke detectors work either by optical detection (photoelectric) or by physical process (ionization), while others use both detection methods to increase sensitivity to smoke. Sensitive alarms can be used to detect, and thus deter, smoking in areas where it is banned such as toilets and schools. Smoke detectors in large commercial, industrial, and residential buildings are usually powered by a central fire alarm system, which is powered by the building power with a battery backup. However, in many single family detached and smaller multiple family housings, a smoke alarm is often powered only by a single disposable battery.

An optical detector is a light sensor. When used as a smoke detector, it includes a light source (incandescent bulb or infrared LED), a lens to collimate the light into a beam, and a photodiode or other photoelectric sensor at an angle to the beam as a light detector. In the absence of smoke, the light passes in front of the detector in a straight line. When smoke enters the optical chamber across the path of the light beam, some light is scattered by the smoke particles, directing it at the sensor and thus triggering the alarm.

Also seen in large rooms, such as a gymnasium or an auditorium, are devices to detect a projected beam. A unit on the wall sends out a beam, which is either received by a receiver or reflected back via a mirror. When the beam is less visible to the "eye" of the sensor, it sends an alarm signal to the fire alarm control panel.

They are less sensitive to false alarms from steam or cooking fumes generated in kitchen or steam from the bathroom than are ionization smoke alarms. For the aforementioned reason, they are often referred to as 'toast proof' smoke alarms.