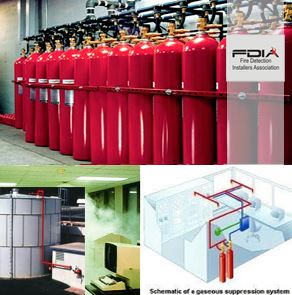 There are four means used by the agents to extinguish a fire. They act on the "fire tetrahedron":

Warning sign for fire supression system.
Systems using certain agents, such as carbon dioxide, in enclosed spaces present a risk of suffocation. Numerous incidents have occurred where individuals in these spaces have been killed by carbon dioxide agent release. To prevent such occurrences, additional life safety systems are typically installed with a warning alarm that precedes the agent release. The warning, usually an audible and visible alert, advises the immediate evacuation of the enclosed space. After a preset time, the agent starts to discharge. Accidents have also occurred during maintenance of these systems, so proper safety precautions must be taken beforehand.

The positive pressure caused by extinguishant release of the Inert agents in this group (IG-541, IG-55, IG-100) may be sufficient to break windows and walls. Humans and structures must be adequately protected.