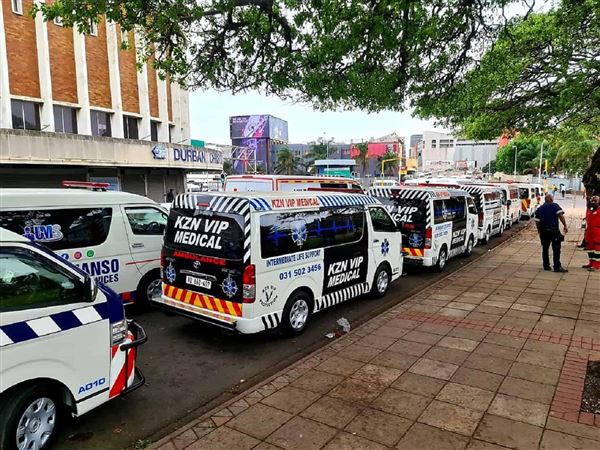 The KwaZulu-Natal Private Ambulances Association (KZNPAA) has announced that it has stopped operating as violent protests flare and intensifies across the province.

“Due to the ongoing protests and damage to properties in the province, we have decided to cease operations,” said the KZNPAA president Andile Nduli.

He stated that some operators who wished to continue providing services may do so with the scarce police resources where possible.

ALSO READ: Fighters must get ready to join protests if army is deployed, Malema says

“As an essential service, we do not enjoy the right in the absence of the law and have a responsibility to ensure the preservation of lives and livelihoods where possible, namely the client (patient), our staff and their livelihoods and tool of work which is primarily the ambulances that we own,” explained Nduli.

“We have stood down until further notice.

“This has negatively affected us as owners of these ambulances because as much as we render medical services, this is also a means of income to us and as much as our clients (patients) will suffer, we would not like to be viewed as being irresponsible and selfish.”

Meditech Emergency Response also announced on Monday that it has also joined in on halting its services due to similar situations.

“Emergency medical services is faced with a situation where we are unable to attend to any medical emergencies. This is due to the hostile environment we are finding ourselves in as a result of the protest action taking place in the majority of Durban and its surroundings,” reads the statement.

“Last night our crews tried to get to a patient who suffered from a medical emergency, however, after trying various different routes we instructed them to stand down for their own safety, as all roads leading to the patients’ location was blocked.”

The company said that on Sunday four of its medical emergencies could not be attended to due to the location of the patients, and the road leading to them being affected by the protesters.

“This is a situation out of our control and we can only hope that it will be brought under control soon in order to restore peace and allow emergency services to fulfil their duties to full capacity,” reads the statement.