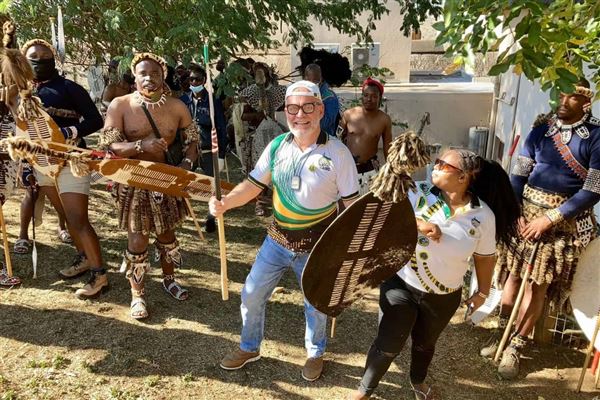 The ANC's Jessie Duarte says they know who was behind the 'counter-revolutionary' actions and commended the police for avoiding bloodshed.

Fears of a Marikana-style massacre and the apparent use of citizens as human shields sparked the ANC’s move to postpone its top brass leadership meeting at the weekend and deploy senior members to Nkandla.

On Tuesday morning ANC deputy secretary-general, Jessie Duarte said in no uncertain terms there had been a plan to use former president Jacob Zuma’s supporters as human shields should the police have taken action against lawbreakers outside Zuma’s homestead in Nkandla.

Subsequently the party instructed the office of the secretary-general and provincial secretaries to investigate the organisers who had incited violence in violation of Covid-19 regulations and individuals who burned ANC regalia in Nkandla.

In a post-NEC special meeting briefing Duarte was at pains to stress the Nkandla situation did not represent a popular uprising, but was engineered from within the ANC and the party hoped it would die off.

The ANC knows who those involved were and the culprits were the same instigators who had organised the disruption of ANC branch meetings in various provinces, she said. The party would, however, leave it to the provincial secretaries to deal with ill-discipline in their provinces, saying such action must be based on facts not fiction.

“We are concerned about ill discipline in the ANC,” Duarte said.

According to Duarte, the ANC was aware of the “counter revolutionary” calls for violence made by some at the Nkandla gathering Of particular concern was the brandishing of weapons and firing of guns, as well as the involvement of former MK members.

By deploying its senior members the party said it was able to prevent possible bloodshed. Duarte also commended the police for having not reacted carelessly to the “volatile situation”.

Although the NEC delegates sent to Nkandla had not yet given a reportback, she said NEC members Lindiwe Sisulu and Tony Yengeni had held discussions with Zuma.

Duarte said, as an ANC elder, the party would continue to support and love Zuma. However, they respected and stood by the rule of law, the supremacy of the Constitution and independence of the judiciary. She highlighted the significance of the Bill of Rights that provides for equality before the law and for the judiciary and law enforcement agencies to be defended from unnecessary attacks and prejudice.

While it respected Zuma’s right to do everything he could to avoid going to jail, the ANC believed the interests of an individual should not trump those of the majority.

She condemned the involvement of MKMVA members in Nkandla and the burning of ANC regalia, saying the NEC resolved to ratify the disbanding of MKMVA and the MM National Council and organise a unity conference of the two.

The actions of MKMVA members at Nkandla was described as a shameful blot on the MK’s 60-year history.