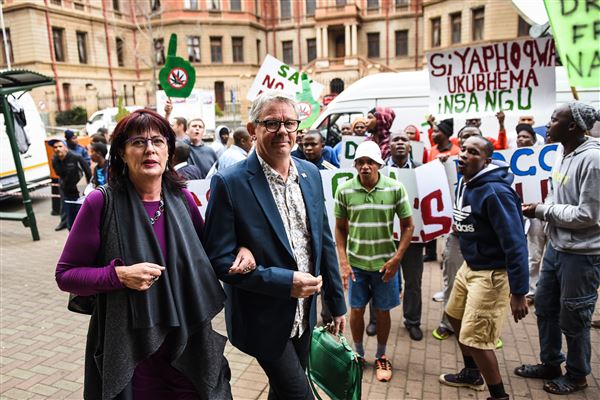 Still no closure on murder of dagga couple’s Jules Stobbs

The first anniversary of Stobbs' murder hangs over the community like a morbid cloud of smoke.

It has been a year since the murder of Jules Stobbs, one half of the “dagga couple”.

His killers are still free while cannabis users and growers are being targeted daily.

Stobbs’ partner Myrtle Clarke has taken a few days off as the first anniversary of his murder hangs over the cannabis community like a morbid cloud of smoke.

On 3 July last year, Stobbs was fatally shot during an armed robbery at the couple’s Lanseria property. The suspects allegedly fled with two cellphones and laptops.

At the end of last month, Clarke visited the Diepsloot police station to get some answers about the investigation as she had not heard from the police since October last year.

She made a before-and-after video of the visit.

“It’s enough now. I have tried to phone hundreds of times but nobody ever answers the phone,” Clarke said on the Fields of Green for All (Fogfa) Facebook page.

She wondered how many of the 50 people murdered on the same day had received justice.

“They looked up the case file and said they haven’t received any info from the informants… there was nothing they could do or investigate,” Clarke said.

She expects nothing from the police anymore, she says.

“There will never be any justice for Julian’s murder and the police continue to … arrest people for trading in dagga and planting dagga and act on info from informative’s and continue to victimise our cannabis community, they just don’t give a s***.”

Charl Henning, an administrator working at Fogfa, said this past year had been a tough struggle.

The organisation had started a GoFundMe campaign to raise money when they realised how vulnerable they were.

“We have just raised enough money to build a wall around the farm so that we can safely continue our work as activists.