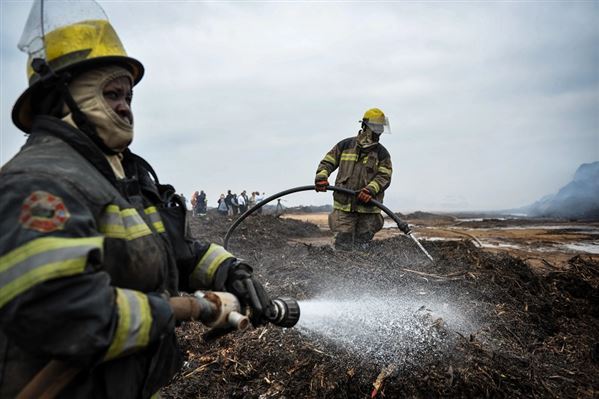 The Pietermaritzburg High Court has slammed the Msunduzi municipality over its management of a Pietermaritzburg landfill that went up in flames last July, accusing the metro of having “scant regard for the health and well-being of its citizens and the environment”.

The New England Road landfill has been plagued by various challenges over the years but the situation reached a tipping point when a massive fire engulfed the site for a week last July, forcing the closure of schools and the evacuation of families in the area.

The South African Human Rights Commission (SAHRC) launched an investigation and took the municipality to court over accusations of mismanagement at the site and concerns about the environmental and health impacts of the site.

In court the municipality argued the SAHRC’s investigation hadn’t taken into consideration the improvements it had made since the fire last July.

But high court Judge Rishi Seegobin didn’t mince his words when he delivered his ruling on Thursday, finding there had been “an abject failure on the part of the municipality to comply with its waste management licence (WML) and to fulfil its constitutional duties”.

“When numerous fires break out at the landfill site, when thick smoke and dust engulf the city, when schools have to be closed, when sections of the N3 freeway have to be shut down and when citizens start complaining about their health and well-being due to the pollution, then there has to be something seriously wrong with the municipality’s operation of this landfill site,” the judge said.

“It is no answer for the municipality to merely say that it is ‘trying’ in circumstances when the overall evidence suggests the opposite.”

He commended the SAHRC for taking up the cudgels.

“The issue of the landfill site is but a microcosm of the many other problems facing the citizens of Pietermaritzburg. This municipality, like so many others in the country, has simply lost touch with its citizens. The officials who are in charge of the municipality seem to forget they are there only to serve the interests of everyone who live and work in the municipality’s jurisdiction,” Seegobin said.

“This is why they are employed. Hard working taxpayers and ratepayers expect nothing more and nothing else. From a ‘City of Choice’, the municipality and its largely incompetent, inefficient and inept officials have literally turned this city into one of filth, grime and degradation. This has to stop.

“Any expected changes can only be achieved not by political will, which is sadly lacking, but by the efforts of civil society and organisations such as the commission.”

He issued a structural interdict in terms of which the municipality now has to submit a plan to remedy the situation and to report back to the court every 30 days on its progress.