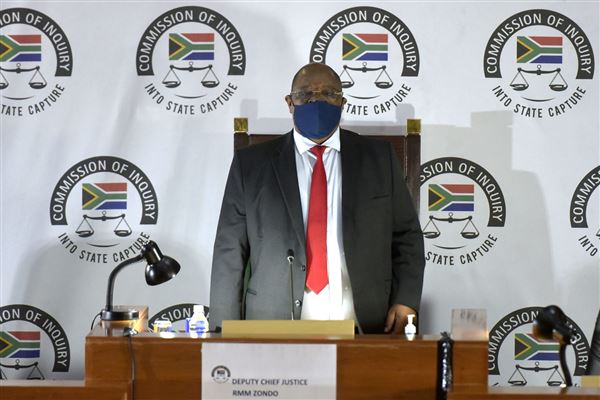 Zondo to ask for another extension of state capture inquiry

The inquiry was due to end in June after it was granted a three-month extension by the Pretoria high court in February.

Deputy Chief Justice Raymond Zondo said on Thursday he would be applying to the high court for another extension of the Commission of Inquiry into Allegations of State Capture.

The inquiry was due to end in June after it was granted a three-month extension by the Pretoria high court in February.

Last month Zondo announced he was looking at the end of June for President Cyril Ramaphosa’s final testimony.

When Judge Nomonde Mngqibisa-Thusi granted the extension order in February she said she was satisfied the commission had made a case for the extension.

Before that extension, when the commission had previously asked for an extension the court granted the request but ordered it to be the “final” one.

If the high court grants Zondo more time, he will hear Ramaphosa’s testimony and a couple of other witnesses in July.

Those witnesses include testimony on the alleged looting of the State Security Agency and former Public Enterprises Minister Malusi Gigaba.

The judicial Commission of Inquiry into Allegations of  State Capture has so far cost taxpayers about R830 million without any prosecutions, according to Rob Hutchinson, MD of public advocacy group Dear South Africa.

In July last year, it was reported that R244.5 million had been spent in 2018, the year the commission was established, and R111 million the following year.

The commission has spent a total of R830 million after it was allocated an additional R130 million to complete its work by March 2021, on top of the R700 million it had spent by then.