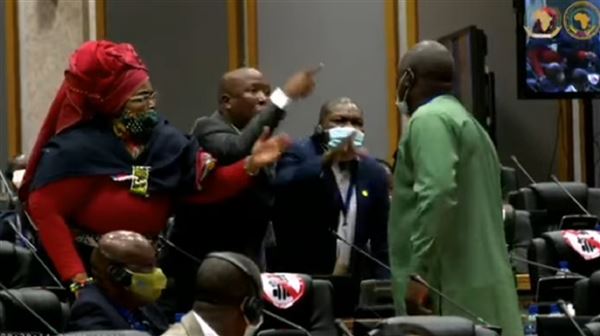 Chaos broke out on the fourth day of the Pan African Parliament sitting in Midrand on Thursday, leading to EFF leader Julius Malema threatening to kill a fellow MP.

The African leaders met to present and discuss the African Union’s theme for 2021 of Arts, culture and heritage.

Acting president and presiding officer Fortune Charumbira announced there had been a case of Covid-19 in the Parliament. Members of Parliament had divided opinions about whether the sitting should be adjourned, with some arguing they came to the country knowing the risks.

“We have been advised of the Covid protocols and honourable [Toussaint] Manga was commenting on that. If you’re not satisfied that there is a case of Covid and what the protocols are, please you can find out, they can give you the documents. Protocols have to be followed and we cannot debate them. Why are we so agitated?” Charumbira said.

A verbal fight that could have turned physical then ensued between the EFF leader and another MP as an angry Malema tells him: “Don’t make noise here. I’ll kill you outside. I’ll kill you.”

WATCH: Malema told us Mpofu could be Zuma’s lawyer in future

Other MPs, including ANC chief whip Pemmy Majodina, held Malema back as he charged at the MP.

Another MP then asks for the meeting chairperson to take note of Malema’s threats to a fellow MP, as others can be heard in the background saying the MP was being disrespectful.

“There is an MP who threatens to kill a colleague. There’s an honourable member who has officially announced that he’s going to assassinate his colleague after we leave this chamber,” the MP said.

The meeting was adjourned.