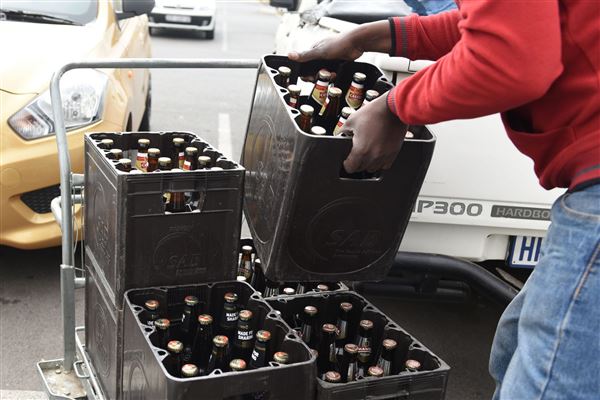 SAB says it is taking the government to court in order to protect jobs and livelihoods in the sector. Finds support from traders body.

South African Breweries (SAB) announced on Wednesday it would pursue urgent legal action in a bid to challenge the government’s fourth ban of alcohol sales for on-site and off-site consumption.

President Cyril Ramaphosa on Sunday placed the country under lockdown Level 4 for two weeks due to the third wave of the Covid-19 pandemic being driven by the highly transmissible Delta variant.

ALSO READ: Level 4 adjustments: Here’s what you can and can’t do

SAB said it was challenging the prohibition on booze sales in order to protect jobs and livelihoods in the alcohol sector.

The brewer said there was no scientific link showing that the consumption of alcohol raised the risk of contracting Covid-19, especially if alcohol is consumed safely and responsibly by citizens in the comfort of their homes.

“SAB is very sensitive to the difficulties and plight we face as a nation in the fight against Covid-19. SAB fully understands the seriousness of this third wave and agrees that lawful and reasonable measures are needed to curb the spread of the pandemic to save both lives and livelihoods,” SAB said in a statement.

SAB said it regretted the government’s decision to ban the sale of all alcohol for the fourth time in the past 18 months. The brewer said it was also deeply concerned by the continued discrimination against the legal alcohol trade, which results in a burgeoning illicit industry in the country.

“The current ban, which is unsubstantiated by robust scientific evidence, has been implemented at a time when the industry was already gearing itself for future stability and was ready to play its part in the country’s economic recovery,” SAB said.

“As an organisation, SAB believes it is left with no other alternative but to defend its rights and take legal action to protect its business and urgently overturn this decision. This move seeks to gain policy certainty, greater transparency in decision making for the future sustainability of its business and value chain.”

This is not the first time SAB has taken the government to court over the ban on alcohol sales.

Earlier this year in January when the country was battling the second wave of the pandemic, the company approached the courts to rule on the constitutionality of the ban.

SAB said on Wednesday the additional legal challenge did not detract from the first application and that challenge was still in progress.

“SAB and its industry partners made submissions to the National Coronavirusu Command Council, but unfortunately the recommendations were not considered and yet another blanket ban was announced without consultation.

“SAB maintains its willingness to partner with the government and its peers in the industry who remain committed to supporting the fight against Covid-19. SAB implored the government to urgently strengthen the partnership with business to accelerate the rollout of Covid-19 vaccines and protect millions of lives and livelihoods.”

Council convenor Lucky Ntimane said the failure by the government to consult with the industry and provide financial support to cushion struggling businesses was unacceptable.

“The president needs to intervene to prevent a jobs bloodbath in the alcohol industry. We stand side by side with SAB and support their right to assert themselves in a court process to seek relief to protect their company.”

READ NEXT: Alcohol ban: Here’s what government could do instead