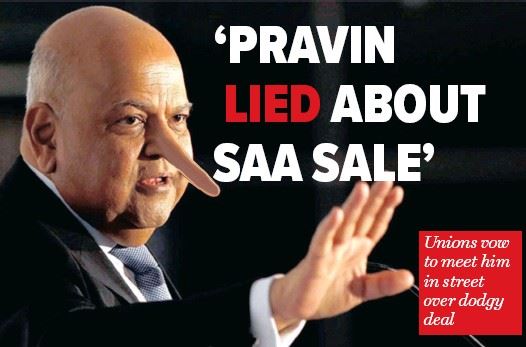 Unions vow to meet him in street over dodgy deal

On Friday, Public Enterprises Minister Pravin Gordhan announced that Takatso Consortium would acquire a 51% stake in SAA, while the government would retain a 49% shareholding in the new airline.

The once glorious state-owned airline will be renamed. It will also be publicly listed on the Johannesburg Stock Exchange and a mass employment equity initiative will be rolled out to recruit local aviation employees.

The controversy, however, is Gordhan’s alleged links to the new airline bosses.

The Star has learnt that SAA pilots are owed close to R1 billion in unpaid salaries, with no mention of how their salaries will be paid with the new purchase in place.

SAA Pilots Association chairperson Grant Back said the pilots were also waiting to see what the deal would bring for them. The pilots have taken SAA to court for various reasons, including 15 months of unpaid salaries.

“We don’t know many answers to the questions coming up. I would say its positive because we needed competent management, who are experienced, and we needed to get the necessary funding. It’s too soon to commit because we don’t know how this is going to affect us; there are still many questions to be answered,” said Back.

The National Union of Metal Workers of SA (Numsa) believes there is corruption in the deal, pointing out that the main players in the sale are linked to the governing party.

“For us there are questions about the lack of transparency. We don’t know what informed the choice of individuals that were chosen for the sale. This is dodgy, we are even concerned that this entity will be a BEE transaction.” Hlubi said.

The Independent Labour and Allied Workers Union has accused Gordhan of lying about the transaction.

“Pravin is lying. How much was 51% of SAA? Why is Pravin not giving us the figure? This looks like a gift from Cyril and Pravin to their friends. Next they are going to privatise Eskom; this load shedding is preparing the way for that. We, the people, will meet Pravin in the streets,” the union’s secretary general Siphamandla Masimula said.

Other unions were predicting the privatisation of SAA, but said they would have appreciated being kept in the loop about the developments at the parastatal.

Speaking on behalf of the SA Cabin Crew Association, Zazi Nsibanyoni said the union was trying to arrange a meeting with officials from the Department of Public Enterprises, in a bid to get full information on the sale.

“We are trying to play catch up and this is unfair because this affects us. Workers are waiting to know what is going on and we don’t have the answers. This seems to be privatisation and Pravin has been very secretive. They really dealt us a raw deal,” Nsibanyoni said.

She said the implications of the deal went as far as affecting Mango, which was a subsidiary of SAA.

“People thought we were being dramatic, but we could see it coming.” Nsibanyoni said.