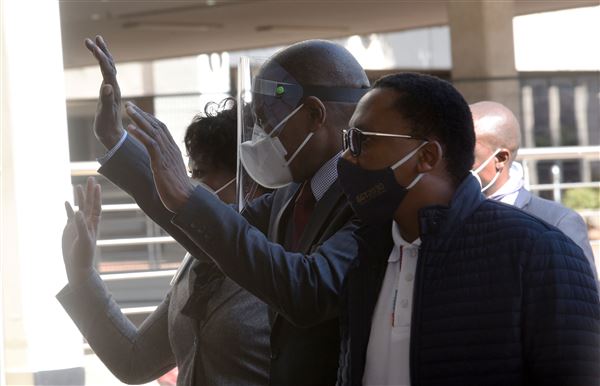 Masuku not quite vindicated yet, says SIU

The SIU said that if Masuku had checked his emails, he could have stopped the multi-million rand PPE scandal from happening.

An elated former Gauteng health MEC Bandile Masuku said in a statement on Saturday that he was “happy and relieved” that no causal connections were found between him and suspended presidential spokesperson Khusela Diko and the “value system and ethical framework” of the ANC.

However, his joy may be short-lived, after the Special Investigating Unit (SIU) said in a statement on Sunday that the High Court judgement by Masuku was flawed and “misleading”, starting with the nature of the unit’s investigations.

“The SIU has never made a finding of corruption and nepotism against the sacked MEC of Health in Gauteng YET, as the investigations were still going on. The issue of him being corrupt or not was not part of what the Court had to determine, as the SIU had not even made a determination on it yet.”

Masuku was accused of facilitating a PPE supply deal that Royal Bhaca, a company owned by a family friend of his, landed in March last year.

The company landed R47 million and R78.5 million deals despite not being registered in the central supplier database.

After questions arose, Royal Bhaca was replaced by Ledla Structural Development, which registered on the database on 9 April 2020 – 11 days before being awarded a R139 million PPE supply contract.

So far, the SIU has recovered R124 million.

According to the judgement, although no crime was committed, the SIU found “Dr Masuku’s conduct to be wanting”.

The SIU said it had so far only found that Masuku had failed to execute his duties the Gauteng health MEC, which they said “allowed the malfeasance, maladministration, malpractice and the total disregard of the rule of law to continue under his ‘leadership’.”

His neglect of his duties was illustrated in “his failure to attend to his emails, despite being in a critical leadership position”, the SIU continued.

Masuku was therefore being criticised for neglect, not lying, the SIU said.

“Prima facie, Dr Masuku’s own version is a confession of unprofessionalism and dereliction of his duties.

“He could have stopped the debacle there and then.”

Masuku’s challenge of the High Court judgement was dismissed with costs, which the SIU said it was in the process of recovering.

The unit said the only appropriate forum for Masuku to challenge the High Court judgement is to lodge an appeal, “rather than continued misstatements and misleading the public.”